These special expedited procedures may include immediate suspension of the motorist's driving privileges. This immediate suspension will happen when MVC finds “good cause”, and other conditions are satisfied. Fatal accidents in which violation of any of four specific statutes are alleged will result, at the very least, in MVC issuing a notice of proposed suspension. This page refers to those four statutes as “the Jersey four.” The Jersey four are:

The actions that MVC may take depend on the answers to these questions:

The table below shows the actions available to MVC. This table applies for any alleged violation of any motor vehicle statute. However, unless the statute allegedly violated is one (or more) of the Jersey four and either a fatal accident or an accident in which serious bodily injury (“SBI”) has resulted, the special expedited procedures outlined on this page will rarely be applied.

What happens following an MVC action depends upon whether MVC issued an immediate preliminary suspension, or whether it issued just a notice of proposed suspension. In either case, the numbers 10, 15, and 45 become important.

When MVC issues a notice of proposed suspension on account of a fatal accident or an accident that results in serious bodily injury, the motorist has ten days in which to request a hearing. This request must be in writing. The ten-day period begins to run on the date that MVC mails the notice. Allowing mail two days for transit each way, and with one or possibly two Sundays in the mix, the motorist will thus typically have a week or less in which to respond. Immediate action is crucial.

For the motorist making a timely request for a hearing, an administrative law judge is to hold 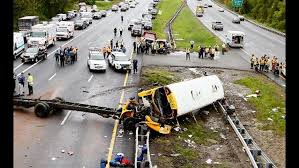 License suspensions by MVC are not imposed for punitive purposes. Suspension purposes, rather, are twofold. The first purpose is to reform and rehabilitate the driver. The second purpose is to protect the public, by keeping the driver off the road during the rehabilitation process.

Our discussion thus far has been theoretical and abstract. A real life example goes a long way towards understanding the process. The real life example we choose is New Jersey Motor Vehicle Commission v. Santiago.

On October 12, 2016, Gilberto Santiago, holder of a CDL, was involved in an accident in the driveway of the East Windsor Township Senior Citizen Center. Eighty-seven-year-old Mary J. Wall was walking in the driveway, behind the bus. In order for her to walk, she needed to use a walker. Santiago put his bus in gear and moved forward. Wall fell and sustained injuries. Nobody saw Ms. Wall's actual fall. Ms. Wall was taken to the hospital. She eventually died from her injuries.

Both Ms. Wall's walker and the bus itself had been moved before the investigating police arrived. The bus reportedly had a mechanical defect. The walker was damaged. However, there was no fresh damage on the bus itself. The investigating officer concluded that Santiago had violated three statutes in the New Jersey Motor Code: Careless driving, N.J.S. 39:4-97; unsafe driving, N.J.S. 39:4-97.1; and operating an unsafe vehicle, N.J.S. 39:3-44. On those charges, the New Jersey Motor Vehicle proposed suspending Santiago's driving privileges for twenty-three months.

Upon hearing the testimony of all witnesses, and reviewing all of the physical exhibits, Administrative Law Judge Mary Ann Bogan concluded that the Motor Vehicle Commission had failed to prove any of the charges by a preponderance of the evidence. She ordered that the charges against Santiago be dismissed. Her findings of fact and conclusions of law are reported at 2017 WL 6551516.

Thus far our discussion has made no mention of motor vehicle points. We held off that discussion because the options available to MVC following a fatal accident or an accident involving serious bodily injury exist regardless of whether the driver already has points, or how many. Motor vehicle points are important, though, for two reasons. The first reason is that both the MVC and the administrative law judge will look at how many points the driver already has in their decision making. The second reason is that two of the Jersey four violations, upon conviction, will cause motor vehicle points to be added to the driver's previous total. Those two violations are reckless driving, and speeding.

Points awarded for convictions for reckless driving or for speeding, when added to the driver's previous total, may push the point accumulation over the limit. That, in turn, will result in an independent cause for license suspension. NJ Driver's License Lawyers™ discuss suspensions and proposed suspensions for points elsewhere on this site.

Road Signs Quiz    Open Positions    About Our Practice    How Did We Do?    Contact Us